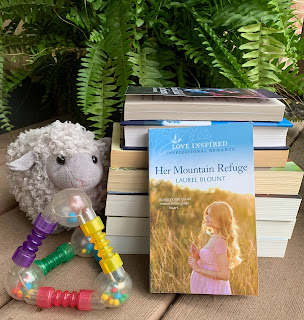 Going home could mean risking her heart…She needs help to start over…But can she ever trust again?Widowed, pregnant and under her controlling mother-in-law’s thumb, Charlotte Tremaine needs help—but she doesn’t expect it to come from her estranged childhood best friend. Yet after a fainting spell lands her in the hospital, Sheriff Logan Carter whisks her away to his foster mother’s mountain home to recover. But when her secrets follow, can she face her painful past with Logan at her side?

Charlotte Tremaine had a tender, compassionate heart that saw people who needed a friend. After making an unwise choice to marry a wealthy, spoiled, hurting man sh his left with the aftermath of widowhood and pregnancy. I loved seeing that her childhood friend, Logan Carpenter, whom she befriended now needed to rescue her and her baby.

There were several characters who were precious. Logan was a sweet, caring man who is the kind of man you’d like to see your sister marry. I was happy to see that he stood by Charlotte and baby Danny when times got rough. I loved Logan’s foster mother who was a blatant matchmaker and a fierce defender of all those she loved. This was a beautiful love story, the second book in the Cedar Ridge Series.

I received a complimentary arc copy of this book. All opinions expressed here in this review are my own thoughts. 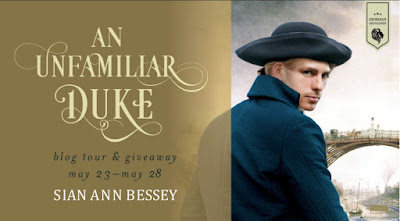 About the Book:
At eleven years of age, Rosalind Ainsworth was convinced that Sebastian Lumley, the future Duke of Kelbrook, was the most odious young man she’d ever met. And ten years later, after having had no contact with the nobleman in the intervening time, her opinion of him has not changed. Unfortunately, neither has the marriage contract their fathers signed soon after her birth. As Rosalind’s twenty-first birthday and the appointed wedding day approaches, Sebastian makes a rare appearance in London. His first meeting with Rosalind since childhood goes less than perfectly, but Sebastian has a compelling reason for honoring their marriage contract—a reason outlined in a document kept behind his workshop’s locked door. After a quick wedding, the new couple relocates to Finley Park, where their acquaintanceship slowly blossoms into affection. But when Sebastian’s secretive work threatens their fledgling relationship and Rosalind’s life is placed in jeopardy, Sebastian finds himself forced to choose between the man he has pledged to help and the woman he has come to love.
My Review:

Sian Ann Bessey writes the best historical romance stories!  She weaves facts along with a wonderful story and this is that of Rosalind and Sebastian.  They have been forced into an arranged marriage that looks like it has little chance of becoming more than a business arrangement.  But, Sebastian determines that he is going to win Rosalind’s heart and their relationship blossoms into a love that will withstand whatever life presents.  It was endearing to see that Sebastian found things that Rosaland liked and created opportunities for her to continue with them.

Sometimes it’s just easier to write your thoughts and feelings on paper instead of saying them.  The letters that Sebastian write to Rosalind were precious. He had made some mistakes and tried rectifying them through his letters and invitations to join him on excursions. Rosalind too, used pen and paper, but more for her own processing as she kept a Bad and Good list of Sebastian. I was worried that if Sebastian found it, their relationship would suffer a huge setback. Rosalind had held onto a hurtful comment Sebastian made when they were younger, but by writing down that offense, she was able to process that and move on to her new relationship with her husband.

Both Rosalind and Sebastian were intrigued with numbers and calculations. There was a level of deep level of trust given to Rosalind when Sebastian showed her his top secret inventions workshop. This also added to the level of suspense and danger that compelled me to want to put everything aside to finish the book.

I highly recommend reading this fourth book in the Georgian Gentlemen series. This can be read as a stand alone if you choose, but these books are so good, you’ll want to read them all! I was given a copy of this book from the publisher through NetGalley. This is my honest review.

Enter for your Chance to Win a Free Print copy!

The Shadow of Memory 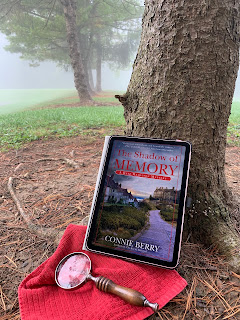 In Connie Berry’s fourth Kate Hamilton mystery, American antiques dealer Kate Hamilton uncovers a dark secret buried in Victorian England.As Kate Hamilton plans her upcoming wedding to Detective Inspector Tom Mallory, she is also assisting her colleague Ivor Tweedy with a project at the Netherfield Sanatorium, which is being converted into luxury townhouses. Kate and Ivor must appraise a fifteenth-century painting and verify that its provenance is the Dutch master Jan Van Eyck. But when retired criminal inspector Will Parker is found dead, Kate learns that the halls of the sanatorium housed much more than priceless art.Kate is surprised to learn that Will had been the first boyfriend of her friend Vivian Bunn, who hasn’t seen him in fifty-eight years. At a seaside holiday camp over sixty years ago, Will, Vivian, and three other teens broke into an abandoned house where a doctor and his wife had died under bizarre circumstances two years earlier. Now, when a second member of the childhood gang dies unexpectedly—and then a third—it becomes clear that the teens had discovered more in the house than they had realized.Had Will returned to warn his old love? When Kate makes a shocking connection between a sixty-year-old murder and the long-buried secrets of the sanatorium, she suddenly understands that time is running out for Vivian—and anyone connected to her.

American antiques dealer and amateur sleuth Kate Hamilton once again finds herself caught up in a mystery as she is attending a Hen Party for one of her friends in the English village where she is currently residing. Kate, with her insatiable curiosity and sense of justice, must find out why a man was found dead in a cemetery with a piece of paper near his body that has a friend’s name (Vivian) on it.

Seemingly unrelated to this incident is the authentication of a priceless Van Eyck painting that the now defunct local sanatorium is selling and an unsolved murder from the 1960’s. But, that is where Kate, and her fiancé DI Tom Mallory, make the perfect crime solving team in uncovering details. What is happening to Vivian’s old chums as they seemingly die from natural causes?

With a sense of foreboding, many red herrings, and plot twists, this story has you quickly turning pages and trying to solve the case along with Kate. I loved the funny and dramatic antics of Vivian as she becomes a major key in helping to solve the mystery and avoid being the final victim. I was concerned for Vivian, hoping she wouldn't end up dead before Kate and Tom solve the case.

Not only are there these intriguing details and events, but there is the relationship between Kate and Tom.  I find this to be one of the story elements that keeps me engaged and hopeful there will be more stories of this perfect crime-fighting couple. The clean romance is a terrific and integral part of the story, but doesn’t overshadow the plot and is appropriate for all readers.

Tying up all of the pieces of the various events was well done, and I had a sense of satisfaction that I was able to solve a part of the mystery. After all, isn’t that the allure to reading a mystery? Seeing if you can bring all of the clues together and be as clever as the sleuths? I enjoyed reading this latest book of Ms. Berry’s and highly recommend it.

My thanks to NetGalley and the publisher for a complimentary electronic copy of this book. I was not required to write a positive review. All opinions are my own.

Horses, Hounds & Happily Ever After

This anthology of clean romance Regency era romances was fantastic! With a wide variety of stories and authors, I felt I had been given a wonderful gift. Each story was unique and well written. This was a great way to read new-to-me author's stories. There were so many fun and interesting stories that I really don't have a favorite, they were that fabulous!

I highly recommend this book for readers of all ages. By purchasing this book, you are not only treating yourself, but you are also helping animals since the profits for the book will be given to a rescue society. Read a story, save an animal. :)

I was given a complimentary copy of the book. All opinions expressed are my own. 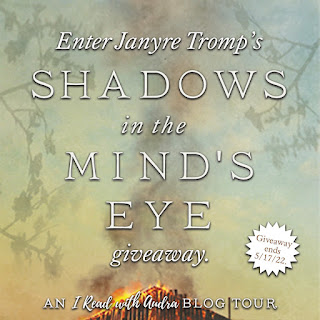 You can enter here for a chance to win all of these fabulous prizes.  a Rafflecopter giveaway
at May 04, 2022 No comments: 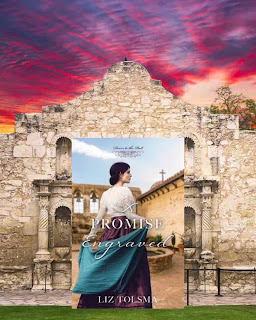 Can Promises Made in Times of Struggle Endure 200 Years? Visit historic American landmarks through the Doors to the Past series. History and today collide in stories full of mystery, intrigue, faith, and romance.Young, spirited Josie Wilkins life is about to take a turn when faced with political turmoil and forbidden love in San Antonio of 1836. John Gilbert has won her heart, despite being a Protestant preacher who is forbidden to practice his faith in Texas. Will either of them survive an epic battle for liberty to create a legacy of love? Nearly 200 years later, Kayleigh Hernandez takes breaks from her demanding job as a refugee coordinator working with Mexican migrants to attend flea markets where she has found a uniquely engraved ring. Enlisting the help of appraiser Brandon Shuman, they piece together a love story long forgotten. But will dangers linked to Kayleigh’s work end her own hopes for leaving a legacy built on hope, faith, and love?

A Promise Engraved is one of the books in the Doors to the Past series from Barbour Books and each one is unique and well researched. Ms. Tolma did a remarkable job in telling two stories that revolved around a uniquely beautiful cat’s eye ring with mysterious engravings on the inside of the band. Reading the stories of both Josie Wilkins and Kayleigh Hernandez and the difficulties they had to overcome in their lives was interesting.

Having heard the phrase, “Remember the Alamo”, was something that I heard about in history class, but reading about the events of the battle through Josie’s life made it come alive. I liked the element of mystery and suspense of the story that is set in the present in Kayleigh’s life.  It kept me wondering how the past and the present were connected.  I’d recommend this book if you like Christian historical fiction with strong female characters.

A favorite quote that showed the wonderful attitude Josie had about circumstances in her life was when she stated, “ … we have no guarantees in this life and that we must entrust the ones we have into the Lord’s hands. That is why I want to be able to live whatever days God has ordained for me to the fullest.”

I received an e-book from the publisher through NetGalley. I was not required to give a positive review. All opinions are my own.

Books Looks by Lisa
So many book, so little time! I love to read books and enjoy sharing my favorites with others.